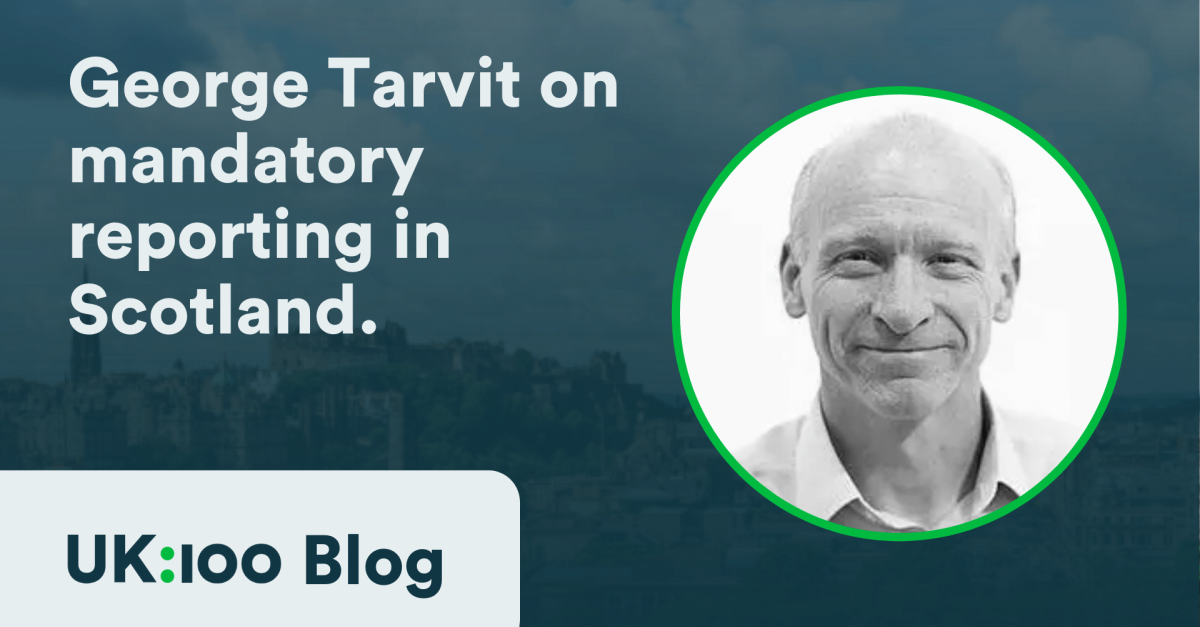 Energy
Now that the UK and Scottish Governments have committed to reaching Net Zero in legislation, all attention is on delivery. Local authorities and their public sector partners are often sitting at the sharp end of that delivery, working to secure the co-benefits of climate action for the people and places they serve. So, with so much focus on action, what can mandatory public sector climate change reporting add to the agenda?

Now that the UK and Scottish Governments have committed to reaching Net Zero in legislation, all attention is on delivery. Local authorities and their public sector partners are often sitting at the sharp end of that delivery, working to secure the co-benefits of climate action for the people and places they serve. So, with so much focus on action, what can mandatory public sector climate change reporting add to the agenda?

Scottish local authorities and the wider public sector community benefit from having the Sustainable Scotland Network (SSN), a long-established and trusted network whose roots lie in the Local Agenda 21 era of the early 2000s. But since the passing of the Climate Change (Scotland) Act 2009, SSN has played an increasingly important role in supporting collaboration, consistency and capacity building on public sector climate action. Working with over 180 ‘major player’ public bodies, SSN has also been at the heart of work on the Public Bodies Climate Change Duties that are integral to the 2009 Act.

From the legislative foothold in the 2009 Act, SSN has worked with the Scottish Government, the SSN Steering Group and a range of support agencies, to develop, implement, support and analyse Scotland’s distinct mandatory climate change reporting duty. Mandatory reporting for Scottish public bodies was instigated in 2014, building on voluntary reporting that had taken place as part of initiatives such as the Scotland Climate Change Declaration. Following a period of consultation and development, reporting requirements were made mandatory through a Parliamentary Order in 2015, and this Order set out the reporting requirements for all major player bodies in Scotland, including all 32 local authorities. The original Order has recently been amended, requiring the reporting of targets on direct and indirect emissions, reporting of information on financial and resource alignment to meet those targets, and improved reporting on adaptation.

Based on good climate and carbon management principles, Scotland’s mandatory reporting requires all responsible bodies to report progress on: Governance, Management and Strategy; Corporate Emission; Procurement; and Adaptation. Public bodies are also encouraged to report on their wider influence on emissions, including work on local area emissions, as well as wider partnership initiatives and sustainability actions. Since 2015, all major players have reported annually, with close to 100% returns in each year. Reports are all available on the SSN website, along with the annual analysis reports produced by SSN.

It is fair to say, Scotland’s public bodies are now well versed in the language and practice of annual climate change reporting. So, what difference has that made, and what are the pros and cons of the Scottish approach?

What we have learned from reporting so far:

We now have the opportunity to build on Scotland’s public bodies' climate change duties reporting (essentially ‘reporting v1.0’), to make reporting a more robust pillar of an effective public sector response to the challenge of global climate change. SSN is working with the Scottish Government, the SSN Steering Group and its members on a number of areas of improvement. These include:

Widening the scope of reporting is another area that needs development. Reporting of Scope 3 emissions is patchy and inconsistent, and climate change reporting needs to work in concert with sustainable procurement policy, to generate better annual assessments of progress and opportunities for improvement. Furthermore, work on local authority area-wide emissions (a long-standing area of work for SSN) needs to evolve to enable a more consistent approach to be established and for annual reporting to better reflect the vital work that public bodies and local partnerships do in helping communities transition to Net Zero and adapt to the impacts of a changing climate.

Finally, more needs to be done to make public body reports publicly accessible and useful. There is growing scrutiny and interest in the role of local authorities, public bodies and local partnerships in addressing climate change. This is likely to continue to grow, with both formal public sector audit regimes and citizen participation being drivers for more and more attention placed on the role of public bodies in delivering change and helping communities, businesses and citizens cut emissions, sequester carbon and build climate resilience. This interest and scrutiny demands that public sector reporting is invested in and made fit for the challenges of the next decade, as we seek to accelerate the scale and pace of change towards Net Zero and climate resilience.

SSN has always benefitted from positive collaboration with practitioners, consultants, researchers, NGOs and businesses in developing and delivering its support to public bodies in Scotland. We have also benefited from alignment with and learning from international, European and UK wide initiatives seeking to support and promote public sector climate action.

Cornwall Council’s experiences of the CDP: The role of reporting and evaluation in building trust

There are now 93 cross-party local leaders, representing over half of the UK population and 34,030,804 million people, committed to meeting Net Zero early