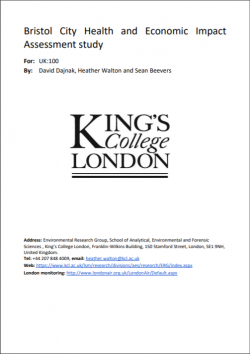 Mobility & Transport
We wanted to find out what impact current and future pollution concentrations in Bristol were having on the health and economy of the city.

ERG has previously carried out similar health impact calculations for London, Greater Manchester, Birmingham City and Liverpool City Region, but to our knowledge, this is the first time that the new health impact recommendations have been applied in practice to the largest city in the South West of England – Bristol – using the NAEI 2017 PM2.5 and NO2 concentrations projected to 2030.

The population in Bristol would gain around 150,000 life years over a lifetime to 2134 if air pollution concentrations improved as projected from 2011 to 2030, compared with remaining at 2011 concentrations. The average life expectancy of a child born in Bristol in 2011 would improve by around 2 to 3 months for the same comparison.

Taking into account the UK Government’s projected future changes in air pollution concentrations from 2011 to 2030, the population would still be losing between 90,000 to 300,000 life years in Bristol (a life year is one person living for one year). Put another way, children born in 2011 are still estimated to die 1.5-6 months early on average, if exposed over their lifetimes to the projected future air pollution concentrations in Bristol. Males are more affected than females, and this is due to the fact that men have higher death rates and die earlier than women.

The report provides figures for both PM2.5 and NO2 separately but then uses one or the other as the best indicator pollutant rather than adding results together to avoid large overestimation of the mortality impact of air pollution (details in the report below). The ‘best indicator’ approach may result in a small underestimate.