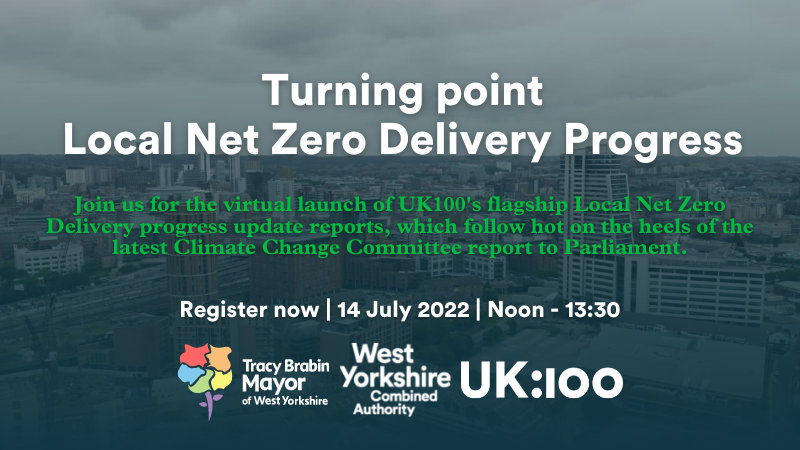 
People across the UK want to see more support for local authorities to deal with the threat of climate change and more support for Net Zero action to address the cost-of-living crisis, according to a new poll from YouGov and commissioned by UK100.

The poll comes as the process to select the next UK Prime Minister gets underway, following the resignation of Boris Johnson.

When asked, on behalf of UK100, the UK's only network of ambitious local authorities committed to Net Zero and clean air, people across the UK said they felt local leaders are best placed to tackle the climate crisis (34%). But 54% said their local authority had too few resources to take effective action, and 42% said they had too little power.

At the same time, an overwhelming 80% of respondents reiterated their support for boosting renewable energy projects to reduce energy bills.

The opinions expressed chime with the issues raised by our series of Local Net Zero Delivery progress reports, which were launched at a virtual press conference on Thursday, 14 July.

They find that, when interviewed, more than 55% of UK100 members raise funding, capacity and regulation/policy issues as the biggest barriers to realising local Net Zero ambitions.

The reports argue that, over the last year, the Government has made significant progress in setting Net Zero targets, but without any sense of how local authorities should deliver them.

"We have a better sense of the ‘what’ than we did 12 months ago, but in many areas what is missing now is the ‘how’ and the ‘who’; without these, delivery will falter," say the report authors.

Despite the challenges, ambitious local authorities identified upgrading the energy efficiency of homes, renewable energy projects and programmes to reduce transport emissions and boost active travel as the key ways they have worked to deliver Net Zero at the local level.

The reports find that local government ambition is not being mirrored or adequately enabled at the national level, and urgent attention is needed to support local leaders to deliver Net Zero.

The cross-cutting recommendations UK100 makes on behalf of its members include calls to:

“The message to Conservative Party leadership contenders from voters is stark: they overwhelmingly want to see Net Zero action to help ease the cost-of-living crisis, and most trust local leaders to deliver it. But they are clear that the national government needs to give local councils more power and resources to accelerate action. While the results aren't a surprise to us, they must serve as a warning to the next occupant of Number 10 that they cannot afford to abandon Net Zero.”

On the findings of the Local Net Zero Delivery reports, Jason adds:

"Local government progress on Net Zero has been significant over the last year, with ambitious local leaders — from across the political and geographical spectrum — making real headway for their communities and the planet. But it is clear that local authorities face significant national barriers that are stifling their ability to do more, more urgently."

"As voters recognise, the major roadblocks to accelerating Net Zero action are the limited powers and resources already stretched local authorities have at their disposal. There is an urgent need to overhaul the diversity of small, short-term, competitive funding slots made available for Net Zero — as suggested by the former Levelling Up Minister Michael Gove. Net Zero is neither a competition nor a short-term goal. It needs real, stable investment."

"At the same time, not only are local leaders most trusted to deliver Net Zero, but research from UK Innovate and PwC has shown they are also the ones who can do it most cost-effectively. In fact, their report finds that for every £1 invested in local Net Zero, energy costs are slashed by almost £2, and communities reap the rewards of more than £14 worth of wider social benefits. And we agree with the report authors when they argue that Net Zero is, therefore, also a means of delivering against the Levelling Up agenda."

"Net Zero is a route to reducing the impact of the cost-of-living crisis, a vital tool for tackling the climate crisis, and an engine for economic growth. We need the incoming Prime Minister to build upon the positive action taken so far and fully embrace the power of local leaders to deliver Net Zero."

Tracy Brabin, Mayor of West Yorkshire, UK100 Co-president and the Chair of the M10 group of Metro Mayors, adds:

“In the last year, across West Yorkshire, our Net Zero plans have already seen more than 600 good green jobs committed by employers. Meanwhile, we have committed £40m of investment in climate action over the next three years which will help us deliver our ambitious plans to make West Yorkshire a Net Zero carbon economy by 2038. And, as the latest polling shows, voters of all stripes want to see more support for their local and regional leaders to do the same. But, as the latest UK100 report makes clear, we need more funding and more support from the national Government."

"The most important message, however, is that Net Zero is above party politics. It enjoys overwhelming public support and can deliver for people and planet. The candidates currently vying to take the keys to Number 10 need to take note."

“I am delighted to be a UK100 Co-president alongside my Labour colleague Tracy Brabin. With the Conservative Party leadership race underway, I think it is important to emphasise that Net Zero is not a party political football. We can, and we must work together to deliver it. And the results of the latest polling clearly tells us that is what the public want too."

"As a local leader, it's also heartening to see that the public clearly recognises the importance of local government in delivering Net Zero. As the latest UK100 Local Net Zero reports show, local authorities are a hotbed of climate ambition."

"In Wiltshire, we have allocated over £90m to delivering a climate programme that includes building all new council housing to a zero-carbon standard, upgrading the energy efficiency of all existing council housing, rolling out electric vehicle charging infrastructure, and helping residents to buy cheaper solar panels. As a result, we're on track to decarbonise the organisation by 2030 — and we're seeking to make the whole county carbon neutral."

“Rural areas have different strengths and face different challenges than urban areas, but we're no less committed to delivering Net Zero for our communities."

“The public want their next Prime Minister to prioritise climate, nature and the environment."

"The latest polling demonstrates the public overwhelmingly supports climate action, particularly amidst a cost-of-living crisis. Communities also want to see more support for their local and regional leaders to deliver it. The latest UK100 report on Local Net Zero Delivery highlights just how much progress ambitious local authorities have made over the last year. It's no wonder, then, that the public wants to see the next Prime Minister offer more support to unleash the full potential of local government."

"It’s vital that politicians of all parties continue not only to work together to protect Net Zero but build on the positive progress that's already been made to make people’s lives better through a clean energy economy.”

“Metro mayors and local and regional leaders across the UK are ready to lead the country to Net Zero, but we need to be backed with greater powers and funding. This is something voters clearly recognise too as the new report from UK100 demonstrates.

“We’re already making great progress in Greater Manchester and are on-track to become a net-zero carbon region by 2038 – well ahead of the national target of 2050 - but we want to go further, faster. We urge Government to free the city regions up, so we can establish the skills base, new technologies and experience to lay the path for the rest of the UK to succeed.

“This is much more than Net Zero, however. What we’re setting out to achieve in Greater Manchester is a greener future, but also a fairer one. For instance, as we work to decarbonise travel, we have announced that single journey bus fares across the whole city region will be capped at £1 for children and £2 for adults from September 2022. We are also developing plans to decarbonise homes through a retrofitting programme – which will also help to reduce people’s energy bills and create good jobs.

“The conclusions of the UK100 Local Net Zero Delivery reports only strengthens our call for greater regional powers and a funding package that matches our ambitions so we can drive the whole country to Net Zero. We have a golden opportunity for an incoming Prime Minister to work with us to decarbonise the country while levelling it up and supporting people through the cost-of-living crisis at the same time."