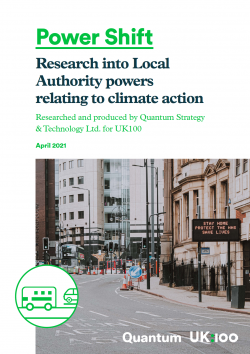 Transport
Our Power Shift report is the most comprehensive examination of the powers local authorities have and need to deliver on climate ever undertaken. It draws on previous expert reports, including those produced for government, combined with a series of interviews with local authorities and other stakeholder organisations.

Carried out by UK100 and Quantum, the report finds local authorities have been leading the green revolution and bringing the UK closer to Net Zero emissions, set by government for 2050. They have been a shining light particularly in key areas such as housing and transport despite their budgets being slashed.

But while the public supports local councils tackling climate change, our new report says they need more help from the central government.

Our report is released the week 48 million people will have the chance to vote on almost 5,000 seats of power in the 2021 UK local elections on Thursday 6 May. It finds local authorities need more powers and resources, clarity over their role and an investment in skills and jobs to take the next step.

And it comes as new Ipsos MORI polling, commissioned by UK100, reveals the public most trust local authorities on green issues with 40% agreeing they were best placed to take action. The polling also found 63% of people want to see more local green jobs and skills in their areas.

The report - taken from interviews with local authorities employees, experts and stakeholders - is the most comprehensive examination of the duties, powers and policies available to local authorities and combined authorities in England. It follows a pledge from more than 50 local councils from Edinburgh to Cornwall to support UK100’s Net Zero pledge to reduce council emissions to Net Zero by 2030 and across their communities by 2045, five years earlier than the target set by the UK government.

Although local authorities might be best placed to start the green revolution, the report also states a lot of it comes down to the time and resources available, and national bodies and laws limiting what they can do. Many local councils are already under-resourced and over-worked, it claims, and for smaller authorities in particular, just managing to fulfil their duties takes all their “resources and ingenuity”.

Currently, ambition and willingness aren't matched by capacity with barriers in place preventing action being taken. These include:

The report urges government to take the following steps including:

The research is backed by a poll of more than 8,500 people, that shows two in five people believe their local authority is best placed to help initiate this change, rather than the Prime Minister and national government. This research is even higher in areas such as Yorkshire and Humber, where 50% of people think their regional and local councils are the best fit to tackle climate change.

The same polling finds only 31% of people believe it is the government’s responsibility and one fifth (19%) believe it is down to the individual.

UK100 Director Polly Billington said: “Our members in UK100 know their communities - and the whole country - cannot get to Net Zero without them. Many of the decisions required to get there will be made by local councils, so what they do matters.

“By codifying this understanding in high definition, our Power Shift report, the most comprehensive examination of the powers available to local authorities ever undertaken, makes it undeniable that the push to Net Zero is simply not possible without local authorities placed at the heart of it.

“And the fact that two in five people believe their local authority is best placed to help initiate the change we urgently need shows just how much public support there is for a locally-led transition.

“We urge the government to recognise that we need to change the existing rules that slow down climate action at the local level. They need to be reformed with the necessary urgency, giving local authorities the powers and resources to put the country on the path to meeting its climate targets by 2050. Our members stand ready and waiting to engage.”

The survey was carried out by Ipsos MORI using their UK KnowledgePanel on behalf of UK100. The UK KnowledgePanel is a random probability online panel of UK adults aged 16+ and overall 8,558 interviews were conducted within the UK between 1-7 April 2021.