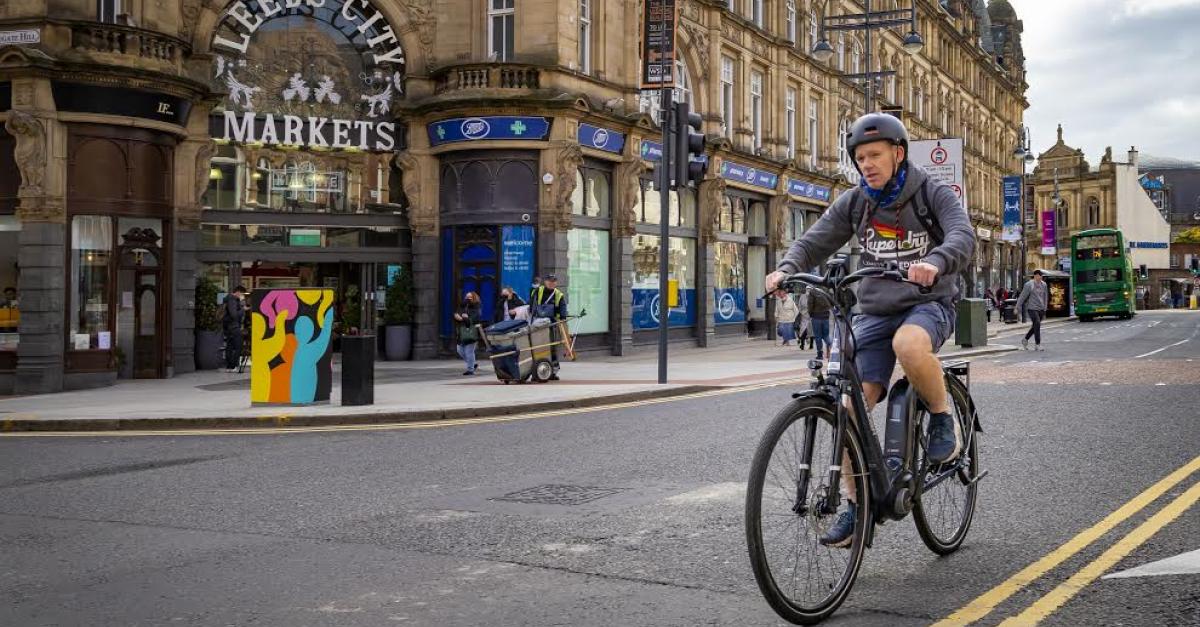 As part of a larger electric vehicle trials scheme, Leeds City Council has procured 22 e-bikes (17 fixed and 5 folding) and is offering free-of-charge trials to commuters. Originally conceived as a pool bike scheme for businesses, the Council redesigned the scheme to provide frontline workers with a safer, greener mode of travel during the pandemic, helping to change attitudes towards cycling.

At the time the scheme was designed, Leeds was under Ministerial Direction to improve air quality. The biggest source of outdoor air pollution in Leeds comes from vehicle exhaust fumes. As part of our broad range of measures to reduce emissions from transport, the e-bike trials scheme was designed to encourage modal shift from car to active travel. The scheme was targeted at those using the car or taxi for short journeys - such as travel to and from work.

When the scheme was originally developed, we planned to offer businesses electric bikes for their employees to use as internal pooled vehicles. Conversations with businesses suggested that their biggest appeal would as an alternative for city-centre journeys between offices or meetings - providing a quicker and less carbon-intensive way of getting around.

However, the pandemic meant that we had to change these plans as most office workers shifted to working from home. As a result, we redesigned the scheme to offer the trials to key workers that live within 10 miles of their workplace. The trials have proven extremely popular.

As well as being a ‘greener’ transport option than cars, the accessibility and health benefits of getting around by electric bike are also a key selling point. Leeds can be a hilly city and this can deter residents from considering cycling as a viable transport option. Electric bikes are great because they make it possible for more people to cycle with ease around the city.

While travelling by electric bike can result in significant savings compared to travelling by car, electric bikes are a relatively novel product and are still reasonably expensive to purchase. Allowing commuters to trial one for a month, at no cost, allows more people to better understand whether electric bikes are worth the investment. A significant majority of participants said that they were ‘very’ or ‘quite’ likely to get their own e-bike after the trial.

The procurement began at the start of 2020 and the first customers went out with the bikes in September 2020. The scheme is currently running and is due to end in October (the e-bikes scheme is linked in with a larger electric vehicles (EV) trials scheme which includes electric vans and private hire vehicles). As yet, there are no concrete plans to extend the timeline of the trial as a whole, but should it run beyond the autumn, there are options available.

The bikes are from Active Cycle Project. They are the supplier and they also do cycle maintenance. There aren’t any other external partners, aside from Zero Waste Leeds - a local charity that helped launch the scheme as part of a virtual engagement session.

The Leeds Citizens’ Assembly and Jury made recommendations for Leeds’ transition towards a Net Zero future, with better access to low carbon transport and active travel being one of them. While this scheme was planned before those public engagements, the Jury’s recommendation has proven that the scheme is consistent with the demand and action sought by residents to achieve Net Zero.

The funding for the e-bikes came from the Clean Air Zone Early Measures grant. That £35,000 government grant provided the money and resources with which to buy, maintain and process the bikes.

Tackling the climate emergency and improving the city’s health and wellbeing are two of the Council’s strategic priorities. Our e-bike trials scheme is part of our larger EV trials scheme and supports the council’s wider efforts to improve air quality, decarbonise transport, and encourage residents to be more active.

We believe that the main impact of the scheme will be around changing the public perception of who cycling is for and encouraging more people to leave their cars at home.

After participants complete the trial, we ask them to complete an e-form to help us understand how attitudes and habits are shifting. So far, 65% of participants have said that taking part in the scheme has made them think “much better” of e-bikes and no one has said that their perception of e-bikes has got any worse. 72.5% say they’re either “very” or “quite likely” to buy an e-bike after finishing their trial.

One resident told us of their experience: “The overall experience of using an electric bike was incredibly positive. Using an e-bike cut my commuting time down by 15 minutes each way and was a cathartic way to end a working day. Because the electric bike was so easy to use, I found I was much more inclined to go out on bike rides and it became my go-to form of travel. I am now keeping an eye out for my own electric bike. However, I will wait to see if they become more affordable first. The electric bike trial was a great way to trial an e-bike without the upfront costs.”

In terms of data on how much CO2 will have been saved by this scheme, we have been asking participants to roughly estimate their weekly mileage on the feedback forms to assess the approximate carbon impact. We hope to have a clearer picture by October.

There is a carbon reduction associated with participants taking part in the scheme but the main benefits are those surrounding mental health, physical well-being, cleaner air, reducing congestion and improving the accessibility and activity of people who might not normally think of cycling as being a viable option. While we have only loaned 22 e-bikes at once, the scheme has demonstrated the potentially significant benefits that widespread adoption of electric bikes could lead to.

Once the original funding ends in October, there are two options for what could happen to the bikes: either they get absorbed into the Council’s pool fleet for staff to use between sites, or we revert back to our original plan which was to sell the bikes to participants - using the sales to fund the continuation of the scheme. Unfortunately, there have been supply issues with electric bikes as a result of the pandemic and therefore we would struggle to replace any of the sold bikes at this time. We have not yet made a final decision and will review options closer to October.

In addition to the up-front cost of e-bikes and the accessibility of cycling, we know that perceptions around road safety and cycle storage are also key barriers preventing more people from adopting electric bikes. The council and the West Yorkshire Combined Authority are both investing significantly to develop new cycling infrastructure and are working with businesses to improve cycle storage options and introduce travel plans.

Demand for the scheme has significantly outstripped the supply of electric bikes available to trial. Obviously, this is a positive problem to have; there is a lot of interest in the technology’s potential, including from those who don’t regularly cycle.

To prevent bikes from being stolen, customers are given a sturdy lock and are asked to sign a liability waiver confirming that they are responsible for the bike if anything happens to it. We strongly recommend that customers take out insurance to cover the bike or add to their home insurance if possible.

It’s worth noting that this sort of scheme may potentially work for all sorts of larger organisations, such as workplaces. This kind of trial could give people a chance to try out an e-bike and experience their benefits, which might then make them more willing to purchase an e-bike through a Cycle to Work scheme.