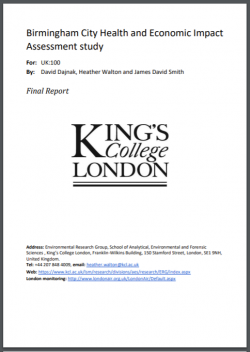 Mobility & Transport
We wanted to see what impact current and future pollution levels are having on communities in Birmingham, so commissioned Kings College London to find out.

UK100 commissioned Kings College London (King’s) to produce a health and economic impact assessment associated with current and future pollution levels in Birmingham City. In this study, King’s combined the relationships between Defra’s Air Quality modelling concentrations and health outcomes for each parliamentary constituency in Birmingham. King’s has previously carried out similar mortality burden calculations for London and Greater Manchester but to our knowledge this is the first time that the new burden recommendations that include a combined PM2.5 and NO2 approach have been applied in practice in a large city area. The calculations relate to deaths or loss of life expectancy from all causes rather than separately for specific causes or for cases of specific illnesses.

The population in Birmingham would gain around 440,000 life-years over a lifetime to 2134 if air pollution concentrations improved as projected from 2011 to 2030, compared with remaining at 2011 concentrations. The average life expectancy of a child born in Birmingham in 2011 would improve by around 2.5 to 4 months for the same comparison.

Taking into account the UK Government’s projected future changes in air pollution concentrations from 2011 to 2030, the population would still be losing between 0.3 to 0.8 million life years after these air pollution changes in Birmingham (a life year is one person living for one year). Put another way, children born in 2011 are still estimated to die 2-7 months early on average, if exposed over their lifetimes to the projected future air pollution concentrations in Birmingham. Males are more affected than females. This is due to the fact that men have higher death rates and die earlier than women.

The report provides figures for both PM2.5 and NO2 separately but then uses one or the other as the best indicator pollutant rather than adding results together to avoid large overestimation (details in the report below). The ‘best indicator’ approach may result in a small underestimate.

Economists assign monetary values to the health benefits in order to compare the benefits with the real costs of implementing a package of policies. The largest proportion of the monetary value comes from a survey asking 170 members of the public how much they would be willing to pay to reduce their risk of experiencing a loss of one month of life (in good health) due to air pollution. Added up across time, people and the total health effects, this is then used to represent the amount society thinks should be spent to reduce these risks. NHS costs and loss of productivity are not included.

The monetized benefits over a lifetime of improvements to future anthropogenic PM2.5 and NO2 concentrations, compared with 2011 concentrations remaining unchanged, has been estimated to be up to £240 million on average/year (at 2014 prices).

Despite the projected future improvements in air pollution concentrations from 2011 to 2030, the economic health impact costs in Birmingham over a lifetime are still between £190 - £470 million on average per year.

These are what is called ‘annualised’ figures - a term for an average per year when the result is not the same every year. They are not actual costs but a measure of the amount of money society believes it would be reasonable to spend on policies to reduce air pollution (for avoiding adverse health effects of the remaining pollution) or was reasonable to have spent on policies that have already reduced air pollution.

Mortality burden calculations are a simplified calculation at one point in time. They are not suitable for analyzing several years in succession because they do not have a mechanism for allowing the number of deaths the year before to influence the age and population size the following year (lifetables do this, see impact calculations above). Nonetheless, they provide a useful feel for the size of the air pollution problem.

In 2011 in Birmingham the equivalent of between 570 to 709 deaths are estimated to be attributable to air pollution (anthropogenic PM2.5 and NO2). These deaths occur mostly at older ages, as is typical for deaths in the general population.

The results varied by constituency with highest in Erdington and lowest in Hall Green. The ranking by constituency did not fully follow the ranking in pollutant concentrations. This is because the results are also influenced by variations in death rates by constituency, which in turn are driven in part by the proportion of elderly in the population and the level of deprivation.

The main report presents a wider range of uncertainty around the results for the mortality burden, mortality impacts and economic costs than the figures shown here.

There will be further impacts from ozone concentrations. The long-term ozone exposure (representative of summer smog ozone concentrations metric) is projected to decrease over time compared with 2011 but less than other pollutants such as NO2 and PM2.5.