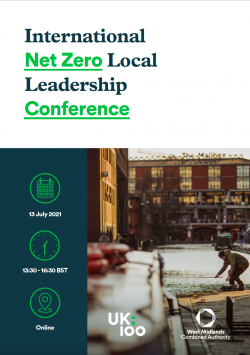 Outreach & Collaboration
The International Net Zero Local Leadership Conference is a key milestone for UK locally-elected leaders ahead of COP26, highlighting some of the priorities in delivering climate change action in our race to Net Zero.

Following a high-level summit between UK local leaders and government ministers earlier in the day, it forms part of a wider effort from local authorities offering a partnership to the UK government. This offer aims at activating better collaboration towards Net Zero.

Hosted by UK100 and Mayor of the West Midlands Andy Street, and attended by expert speakers and leading decision-makers from local and central government, business, NGOs, academia and trade bodies, the conference will explore:

After an opening plenary we’ll break off into two rounds of in-depth panel discussions across six areas critical to Net Zero (listed below).