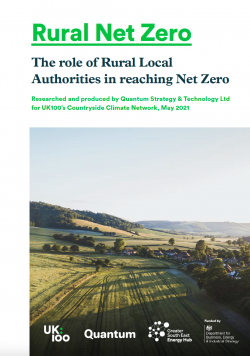 Rural local authorities face different challenges in delivering Net Zero than their urban counterparts. In some areas, such as housing retrofit and decarbonising industry, both rural and urban areas face significant challenges that are as yet unresolved by national policy.

In transport and service delivery, as well as for some housing issues, the challenges of population sparsity and a lack of economies of scale, mean rural local areas will need to deliver different solutions to urban areas.

In areas such as land use and renewable energy, rural areas will bear the brunt of the requirements to deliver the national contribution to climate change targets.

This report investigates the particular challenges that rural local authorities face, and proposes some priority areas for action, both for the authorities themselves, and for national government.

The research has been informed by an analysis of the climate emergency strategies or action plans developed by members of the Countryside Climate Network (CCN) and Britain’s Leading Edge (BLE) authorities, as well as interviews with 17 rural local authorities and supporting organisations and feedback from CCN members.