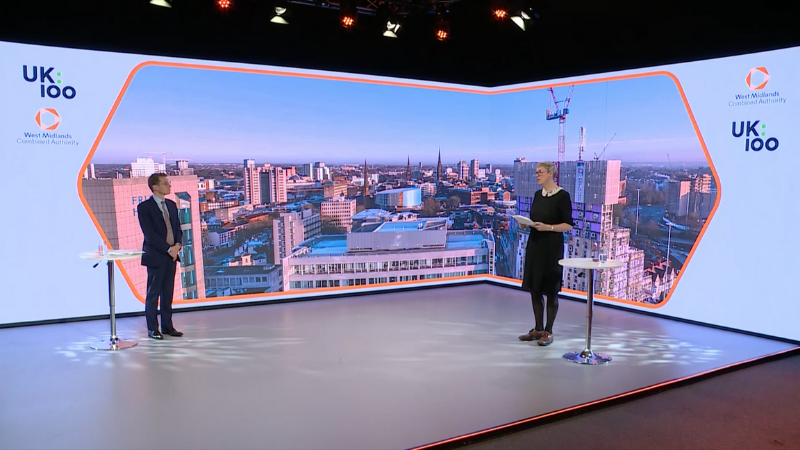 Our flagship event of 2021, co-hosted with West Midlands Combined Authority, designed to speed up the shift to Net Zero in the lead up to COP26.


On 13 July 2021 more than 30 local leaders from across the UK, and 600 delegates from local and central government, business, NGOs, academia and trade bodies, joined the International Net Zero Local Leadership Summit and Conference. Watch each session in the links below.

At the Net Zero Local Leadership Summit, 32 mayors and leaders from across the UK gathered to sign a joint declaration on delivering Net Zero in the UK.

Akin to the Paris City Hall Declaration which paved the way for the COP21 agreement, the Net Zero Local Leadership Communique argues local leaders need new powers and resources to tackle climate change with the fierce urgency of now.

Building on the commitments and actions already made by local leaders, the summit was designed to speed up the shift to Net Zero. It did this by demonstrating the power and effectiveness of local leadership on climate and the need for enhanced partnership between local government, UK national and, devolved governments and with business.

The International Net Zero Local Leadership Conference later in the day was designed to highlight some of the priorities in delivering climate action in our race to Net Zero.

Together with the summit, it forms part of a wider effort from local authorities offering a partnership to the UK government aimed at activating enhanced collaboration towards Net Zero.

It was just the start of building partnerships to support the delivery of Net Zero and we look forward to contininuing the conversation in the lead up to COP26 in Glasgow.

From video messages sent in by COP26 President Alok Sharma and the Mayor of LA to op-eds in The Times, get all the key content from the day below, including a recording of each session.

Jump to each speaker using the links below. Please note that part two was under Chatham House rules so is not available to watch.

Jump to each speaker using the links in their names below, and read more about the conference in this brochure.

Some highlights included Green Finance Institute’s Chief Executive Dr Rhian-Mari Thomas launching the GFI’s excellent local climate bonds campaign on the finance panel. The LCB campaign will target all 404 UK local authorities with a cost-effective way for them to fund hundreds of green local projects ahead of COP26.

Mayor of Bristol Marvin Rees urged that climate action must be wrapped up with tackling other social crises and Anthony Browne MP, Chair of the APPG for the Environment, made the case for local and central government working together.

On the local energy planning panel, Cheryl Hiles, Director at WMCA's Energy Capital, said national guidance must be clear on what local authorities remit is within energy and Cathryn Scott, Director, Enforcement & Emerging Issues at Ofgem, highlighted how Ofgem can use price controls as ways to fund Net Zero.

A joint statement by the metropolitan mayors and UK100 and its constituent members. It proposes a new, enhanced partnership between UK government and local authorities to speed up the shift to Net Zero in the UK.

Local and regional government will play a pivotal role as we work to attract new, green industries to the UK and create good, long-term jobs 👇🏿🌍 https://t.co/oZodo33SvJ

Here in London, we’re taking action now to get our city to net zero emissions by 2030—including the world's first Ultra Low Emission Zone.

”Rather than [local authorities] being adversaries, the truth is we stand ready and willing to be valuable allies in our shared mission to deliver a #NetZero UK.”@SadiqKhan's msg to the government at our #NetZeroLocal Leadership Summit last week👇 @WestMids_CA @MayorofLondon pic.twitter.com/rA9JW1mO03

"We know our places, we know what we need to do to deliver #NetZero, but we need the levers + resources from you to do it at pace."@SusaninLangside's message to government at our #NetZeroLocal Leadership Summit last week.

”Central government has got to use local authorities.

”Give them the powers and the resources to deliver what only they can deliver.”⚡️

Lots going on today (and I am not talking about my increasingly frayed attempt to home school and edit stories), but this is a big and important call from Andy Street and @UK100_ https://t.co/PmHkuzgjHU

”It seems so wrong that so many new build houses are adding to the 29 million that will need retrofittting.”

Great to be joined by @beisgovuk @KwasiKwarteng at #NetZeroLocal Summit to hear our “offers and asks” as local leaders and mayors call for a new relationship with central government to tackle climate change. Details on @UK100_ website. pic.twitter.com/36lOkBejP2

Kicking off the Net Zero Transport session @UK100_ #NetZeroLocal is @AndyBurnhamGM outlining how we need to change 'Car is King' in urban areas🚶‍♀️👨‍🦯👩‍🦽🚴‍♀️🚌🚎🚉 lots to be done... 🙌 pic.twitter.com/i56GroZ107

I'm delighted that @LewishamCouncil is supporting the @UK100_ communique for a Net Zero UK.

As part of our climate action to be a carbon neutral borough by 2030, we are committed to transforming jobs, homes and transport for a greener Lewisham.#NetZeroLocal

We'd like to say a big thank to our business partners for supporting the conference. Watch their take on the importance of local climate action.