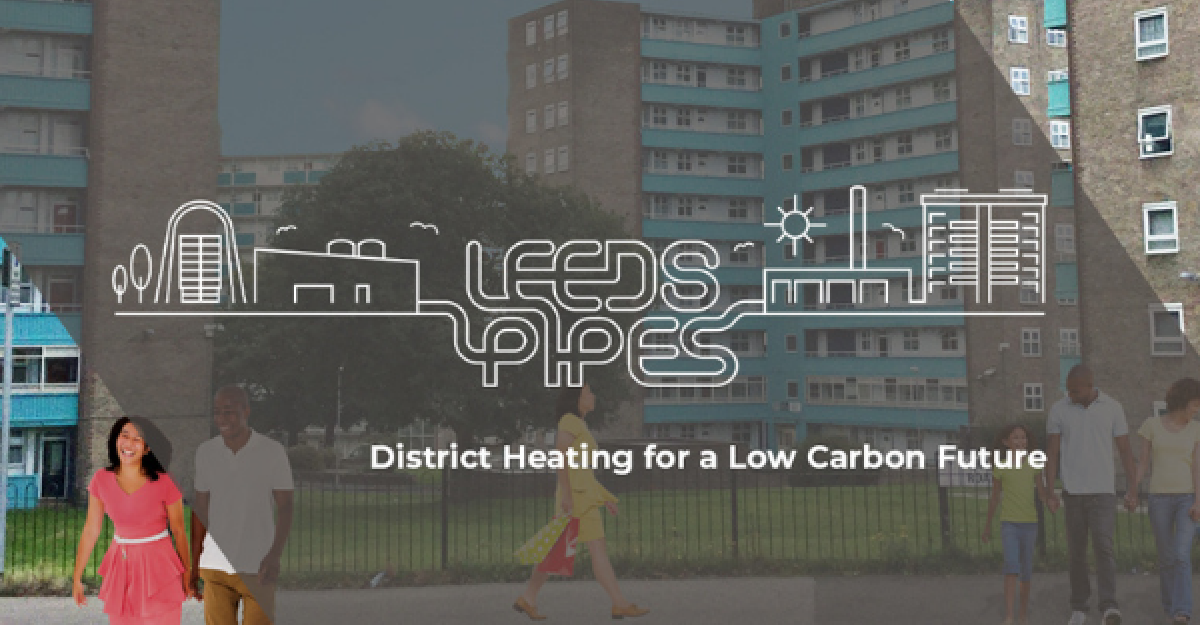 In Leeds more than 34,000 households live in fuel poverty. To help tackle inequalities across the city whilst also addressing the climate emergency, the Leeds PIPES district heating network provides low carbon heat and hot water to residents, civic buildings and businesses in Leeds. Once the first phase of the scheme is complete 1,983 council homes will be connected to more sustainable and affordable heat, saving residents an estimated 10 to 25% on their energy bills. When fully built out, the network’s first two phases will save a combined 11,000 tonnes of greenhouse gases every year—and will save even more as the network expands.

The current heating systems installed in many of our council houses isn’t economically viable - for the council or tenants. They are heated using out of date, often expensive electric heating systems. The PIPES project works by using heat generated from household waste at the city’s Recycling and Energy Recovery Facility (RERF) in Cross Green.

A District Heating Network (DHN) is a system of underground pipes that deliver heat via hot water to buildings connected to the network. The network itself is made up of two parallel insulated pipes - one carrying hot water into homes and the other returning the water. While it’s only recently started gaining ground here in the UK, some 64% of all homes in Denmark are heated via DHNs. They’re renowned for being cost-effective and sustainable.

Over 1,000 council homes have already swapped their old electric heating for a connection to the £40+ million district heating network in Leeds, with almost 2,000 homes and numerous businesses set to join the network later this year. Once linked up, the network is projected to save residents 10-25% on their energy bills while reducing our city’s annual emissions by 11,000 tonnes.

The network connects to the city’s Recycling and Energy Recovery Facility (RERF) in Cross Green, which opened in 2016 to burn up to 150,000 tonnes of landfill waste - generating around 13MW of electricity. To make that happen, we’ve constructed a c8km spine to the city centre with a 3km spur to Lincoln Green. Given that the UK produces some 27 million tonnes of residual waste annually, it’s no wonder that circular economy and resource efficiency expert WRAP has described energy recovery as a ‘sensible and sustainable option’. Waste-to-energy plants are considered a low carbon technology as they are extracting value from a resource that would otherwise be landfilled. All waste to energy plants are regulated by the Environment Agency to ensure that they meet the conditions of their operating licence.

In the long-term, we hope to create a series of district heating networks that cover the whole of Leeds - as they do in Scandinavian models. To make that reality, we have undertaken detailed heat mapping and master planning to identify opportunities and used that evidence to create supportive planning policies with the Core Strategy and to inform a district heating Local Development Order.

Phase one of the spine DHN has already been successfully completed, and over 1,500 council houses successfully connected to it. Construction of the second phase of the project into the city centre is also complete, following an additional £2.4 million in funding from the Heat Network Investment Programme. That extra injection of cash has added an extra 2.5km to the current 16.5km network.

A third phase of the network would see the scheme being extended to the South Bank area to connect even more buildings, including the Leeds Discovery centre. That’d see our carbon footprint reduced by an additional 3,000 tonnes.

This is a joint project between Leeds City Council who own the network, Vital Energi who have built and now operate the network and waste management firm Veolia who supply low carbon heat produced at the RERF. West Yorkshire Combined Authority and Leeds City Region Enterprise Partnership (LEP) have provided £4 million funding. An additional £6.6 million has come from the European Regional Development Fund to help with connecting 1,260 council homes in the Lincoln Green and Ebor Gardens areas. Phase two secured £2.4 million of HNIP money, which is funded by the Leeds City Region Growth Deal and the European Investment Bank’s European Local Energy Assistance (ELENA) programme.

Leeds PIPES isn’t simply a commercial project; it was given its name following a collaboration with the local Co-operative Academy in which Year 9 pupils worked with members of the project team to understand how the heat network would work and the benefits that it’d bring to the city. The children came up with the name ‘Leeds PIPES’ - Providing Innovative Pro-Environment Solutions.

Phase 1 of the DHN is owned by Leeds City Council and phase 2 is owned by a SPV – Leeds District Heating Pipe Co ltd.

To date, most of the reduction in carbon emissions in the district has been achieved via reductions from electricity generation in the National Grid. That’s largely due to a move away from coal burning power stations towards renewables (like off-shore wind farms). However, as many councils are experiencing, the speed and size of the reduction required is impossible to achieve through changes to national energy infrastructure alone.

We need to see changes across every sector - transport, housing, commercial property, agriculture. And we need to see a reduction in energy consumption levels achieved in part by enormous investment in energy efficiency. This project is proof that there is commercial value in investing in these kinds of energy innovations and that they can benefit a wide range of players - from residents and businesses to councils and technology companies.

The scheme will provide low carbon heat and hot water to 1,983 council homes which will save tenants money on their energy bills whilst reducing the city’s carbon footprint.

This project also has wider connotations for the community, providing local employment and training opportunities. So far, the project has helped to employ more than 430 people in the local low carbon sector - including 36 apprentices. It’s being used to educate local schools on climate change - with the Leeds PIPES network being named by a local academy.

The district heating network will reduce the city’s carbon footprint by 11,000 tonnes per year.

The council has now delivered the first phase of the city-wide district heating network, with approximately 8km of pipework installed linking the RERF to the city centre. The network is already supplying commercial customers and council multi-storey flats in the Lincoln Green, Ebor Gardens, Stoney Rock and Saxton Gardens areas and beyond. It is estimated that this will reduce fuel bills to potentially vulnerable residents by around 10-25%, and will provide carbon savings of over 3,800 tonnes per annum from these flats alone.

The second phase of the district heating network is also constructed and is now being commissioned, with the Town Hall, Civic Hall, Museum, Central Library and Art Gallery, and St George’s House due to be connected to the network early in 2021. These buildings alone will save over 550 tonnes of CO2 per year.

A new heat network centred around the G-Mex building in Manchester is helping to reduce the city’s carbon emissions.

RESO is a project set up in Coventry to explore ways of generating and storing low-carbon energy on a city-wide scale.