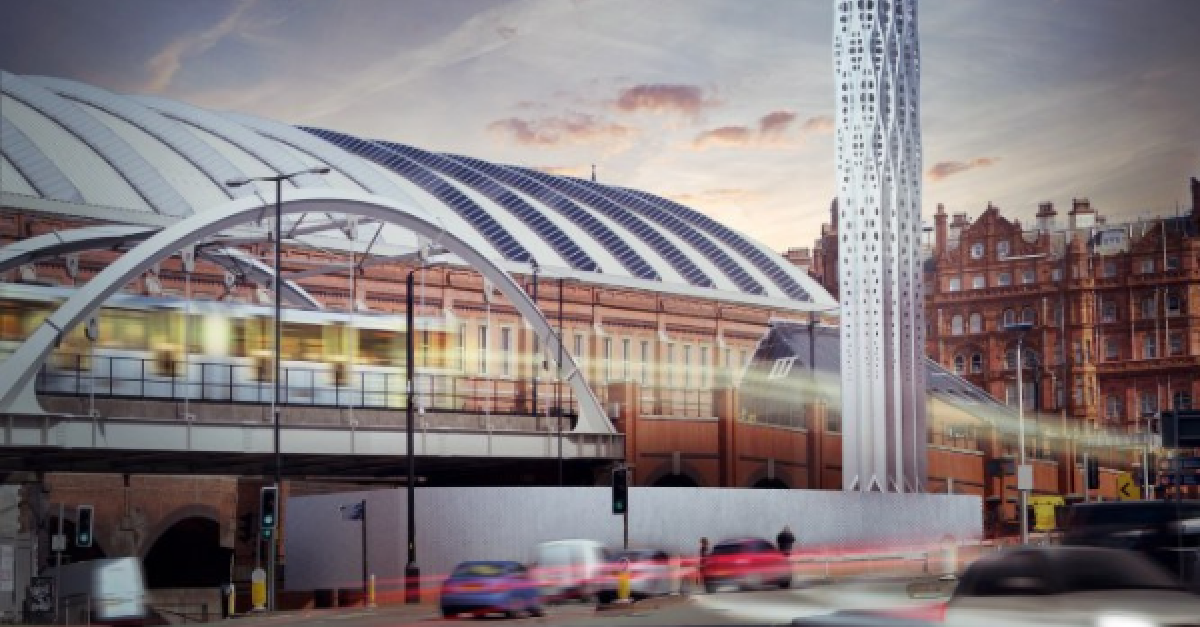 A new heat network is being installed in the centre of Manchester which will not only help to reduce the city’s carbon emissions but is also creating something of an architectural highlight in the city centre. The network will provide a highly efficient, heat and power solution for some of Manchester’s most iconic buildings, making significant carbon reductions.

In a bid to be carbon neutral by 2038, we need to change the way Manchester City Council heats and lights its buildings. Decarbonising buildings is one of the key challenges set out in the city’s Climate Change Action Plan and the wider Manchester Climate Change Framework.

One element of Manchester’s plan to be Net Zero by 2038 is the Civic Quarter Heat Network (CQHN), at the core of which will be a new energy centre adjacent to Manchester Central Convention Complex (or G-Mex as it’s commonly known).

The network uses power cables to distribute the energy generated and underground pipes to deliver heat and hot water to connected buildings - one of the most cost-effective ways of reducing carbon emissions from heating. Heat is generated from the new energy centre by the Complex, which is set to be something of a sculptural landmark in the city. Designed by award-winning architects Tonkin Liu, the centre's five flues have been turned into a ‘Tower of Light’.

The energy centre houses a 3.3MW combined heat power (CHP) engine and two 12MW gas boilers which will generate and harness recovered heat for distribution via a 2km district heat network. The scheme is projected to save an initial 1,600 tonnes of carbon emissions per year, with the energy centre becoming more efficient as additional buildings are connected.

The first building to be connected are the Manchester Central Convention Centre, followed by Town Hall Extension, Central Library, the Bridgewater Hall and Heron House but the whole point of the network is that it’s easily expandable meaning that more buildings can be added.

Planning was approved by Manchester City Council in January 2018. Work started in summer 2019 and is due to be completed by the start of 2021. By August 2020, the final sections of the 40m high tower had been installed. Once the project is complete, the Tower of Light will act as a chimney for the energy centre.

The Council was named as one of nine winners of funding earlier in 2017 as part of a £320 million national heat networks programme.

It’s been part-funded by a £2.87m grant from the Government’s Heat Network Investment Programme, with Manchester City Council being one of the first local authorities to receive the funding. The network will generate income by connecting to Council buildings and developing connections with private developments in the city centre - selling heat and power. The Council has backed the scheme through a loan with the payback period of 25 years.

The energy centre forms part of the buildings and energy strand of the city’s Climate Change Action Plan - the high-level strategy for tracking climate change. This looks at five areas for action in order to stay within the Council’s carbon budget.

The £20m scheme is set to save more than 6,400 tonnes of carbon emissions in its first five years of operation.

The heat network will reduce operating, maintenance and capital replacement costs through not having to install individual boilers and improving safety as there’s no need for gas supply in buildings. The lack of boilers, flues and gas connections also means reduced equipment costs.

The promise of a complex, low-carbon project in the city centre was a long-term commitment that the Council successfully delivered on.

Without EU financial support during the development phase (ELENA funding), this project would not have progressed. Replacement funds need to be made available for such investments in the future.

The system is designed to enable supply of an increased demand and to accommodate future renewable generation technology. This future shift from gas is something that will rely on future alternative energy sources. The fact that the network gets more efficient as more buildings are added to it is a great incentive to expand across the city.

The setting up of that vehicle and the design, build, operation and management of such a scheme requires a number of key skills and expertise; CQHN has relied on significant input and investment from the Council to bring forward this project and has been through a learning curve to make sure that the entities are set up in the most advantageous way possible.

RESO is a project set up in Coventry to explore ways of generating and storing low-carbon energy on a city-wide scale.