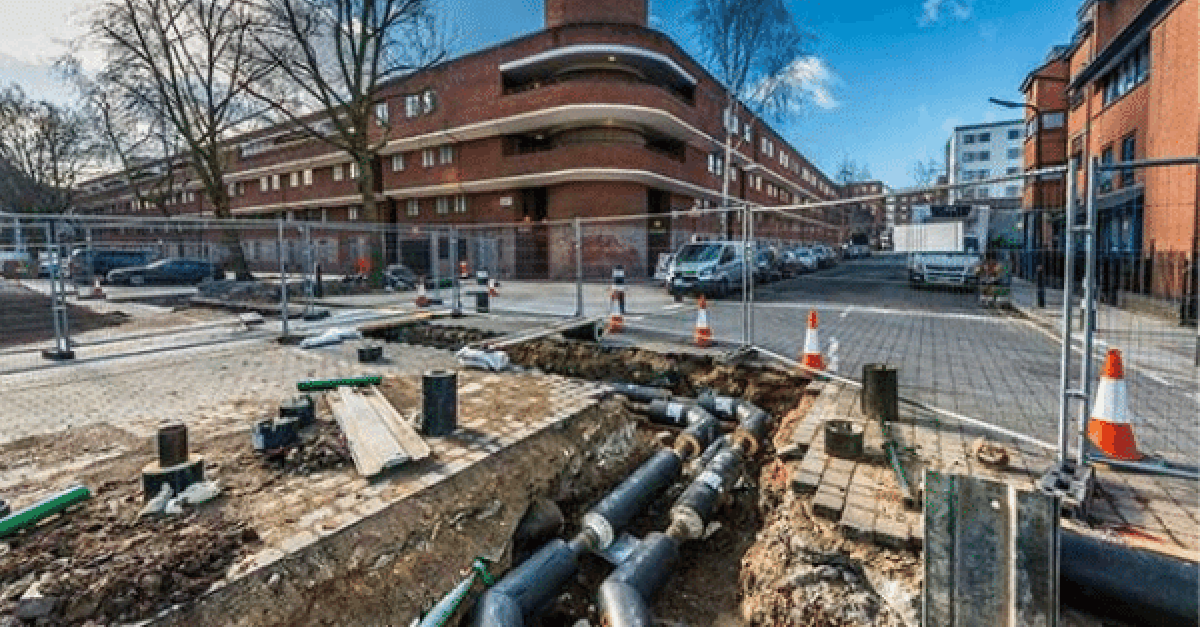 Working with Vital Energi, Camden Council has built a district energy network between Euston and King’s Cross train stations in order to provide heating and hot water to 550 homes, a new primary school and community facility. The project involved the retrofitting of a new low carbon energy centre within an existing council-owned car park, alongside new cycle parking facilities.

By 2020, the London Borough of Camden had a target of reducing CO2 emissions by 40% (set against a baseline year of 2005). To reach that goal, we wanted to drive the delivery of Decentralised Energy Networks (DEN) to improve the efficiency of heating in the borough.

The Somers Town Heat Network was set up in 2015 to initially provide heat and hot water to four housing estates in Somers Town: Monica Shaw Court, Clyde Court, Oakshott Court and Goldington. Since then, a fifth estate has been added, alongside the redesigned Edith Neville School. A Combined Heat and Power (CHP) has been installed in a disused council-owned car park which, alongside heating and hot water, produces low carbon electricity. This generates income through electricity sales. Electricity is currently sold to the Grid but from early 2021 will supply directly to the Francis Crick Institute (Europe’s largest biomedical research facility). CHP is a technology that simultaneously generates heat and electricity and is fuelled by natural gas, which has a lower carbon content than Grid electricity. While it can be used in a single building with appropriate heating and electrical demands, it works particularly well when a number of varied heat demands (for example, schools, housing and hospitals) are connected through a district heating network.

Designed within the scheme is the potential for future growth with several further connections lined up including private and social housing.

The scheme was implemented in two phases. Phase 1 saw the installation of the district heating network connecting four estates (350 homes) and a retrofit energy centre being built into the basement of a 1960s council estate in an under-used car park. Phase 2, which Camden received Heat Network Investment Project (HNIP) funding to deliver, saw the installation of the CHP engine and thermal stores, and connecting one further housing block (200 homes) and a school to the network.

By breaking the scheme into two phases, we were able to analyse the operational heat demand data and with that knowledge, best match the appropriate CHP engine size.

Vital Energi designed and constructed the network, while the Francis Crick Institute provided £3.8m towards the £6m construction costs. The Edith Neville School and the five council-owned estates are the main beneficiaries of the project.

Supported throughout by the GLA's Decentralised Energy for London programme, the scheme was originally borne out of feasibility work showing the huge potential along the Euston corridor.

In addition to the benefits realised for the buildings currently connected to the network, Somers Town Energy has enabled wider regeneration in the area under Camden’s Community Investment Programme.

Following the completion of the first two phases of the project, a number of potential partners have contacted the Council to enquire about potential connections to the network for upcoming new developments. The construction of this asset demonstrates the value of Council led energy provision and how this can support low carbon regeneration in an area.

Somers Town Energy DHN won District Heating Project of the Year and has received widespread praise for the demonstration of how Council housing assets can be used to drive decarbonisation. We believe this is the first stage of what will grow to become one of the UK’s major community heat networks enabling a widespread increase in efficiency of heating in the Somers Town area.

The project has seen a reduction in energy costs for residents living in the social housing connected to the network, contributing to the alleviation of fuel poverty among Council tenants while enabling the Council to achieve its target of a 40% reduction in CO2 by 2020.

The design of Somers Town Energy is such that when the lifecycle of the CHP has elapsed, Camden are able to replace the CHP with lower carbon and more cost effective technology in the future (such as air source heat pumps). This flexibility in design will help Camden to further decarbonise the system, contributing to borough-wide carbon reduction targets and aid in Camden’s response to the climate emergency.

The location of the installation made the project extremely challenging. As the project was located close to Euston and St. Pancras International Station, the removal and reinstatement of cobbles, working on busy highways and walkways, and dealing with the congested existing utilities in central London were key challenges we encountered when delivering the project.

Extensive consultation with local residents was undertaken with regular project updates provided to ensure that they were fully aware of the extent of the disruption in the area - as well as the benefits that the project would deliver.

The design of the retrofit energy centre was also a key challenge for the project. The delivery of all of the plant equipment associated with phase 2 of the development was completed within two days to ensure there was minimal disruption in the area. We also had to ensure that all external alterations were in keeping with the character of the area; the flue from the energy centre was designed to run up the side of the building and was clad to replicate the lift shaft already in place on the other side of the structure. This design works well  with the surrounding area and the presence of the external flue is almost unnoticeable at street level. 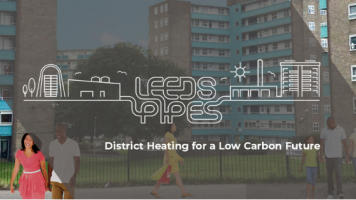 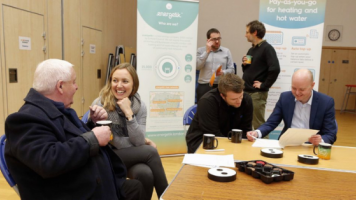 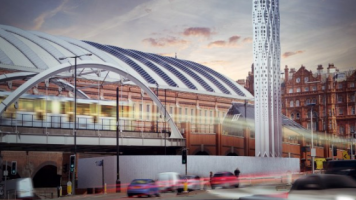